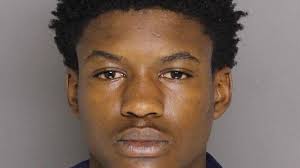 By now, most of us have seen the mug shot of then 16-year-old city resident Dawnta Harris taken after his arrest for the felony murder of Baltimore County Police Officer Amy Caprio along with burglary and theft. In it, Dawnta looks tough. But if you look closely, his eyes, which refuse to meet the camera, seem fatigued — far more so than any 16-year-old’s should look. His mouth is closed, as if purposely resisting expression.

This image stands in stark contrast to the description of Dawnta’s face when he sat in a Baltimore courtroom this week and received a guilty verdict that could be followed by a sentence of life in prison. According to news reports, he “slumped and began crying.”

When I learned of Dawnta’s reaction upon hearing his verdict, I too welled up. Perhaps it’s a natural instinct: As the mother of a 16-year-old son, I feel protective not only of him but, by extension, all teenage boys who are trying to find their way in a complicated world full of distractions.

I do not, in any way, want to undermine the senseless way that Officer Caprio died. It was unquestionably tragic. But if you were to peel back the layers of Dawnta’s life circumstances, I have to wonder if they weren’t predictable precursors to his own tragedy — those over which he had little to no control. Dawnta Harris is poor. He’s black. And he’s behind in school. Statistically, it’s a combination that works against him and countless others who share his circumstances.

Dawnta Harris resided in the Gilmore Homes public housing complex in West Baltimore, where plans for the property’s demolition are underway to make the area more open, and therefore make it harder to hide the illegal activity that, according to Baltimore City’s Housing Authority, proliferates in and around the community. Neither I, nor my son, can fathom the daily stress and the lifelong, negative impact of being raised in an environment where crime and violence are everyday occurrences. But that was Dawnta Harris’ reality.

Statistics tell us that black males, like Dawnta, are far more likely to be incarcerated than white males. The lifetime probability of incarceration for African American males born in 2001 is around 32 percent, compared to 6 percent for white males, according to a 2016 study conducted by the Obama administration. I don’t believe my 16-year-old son, who is white, has a single friend in jail. I doubt Dawnta Harris can say the same.

Dawnta Harris is now 17 years old and, according to newspaper reports, in ninth grade. Being behind in school makes him much more likely to drop out of high school altogether, and to not complete further education. High school dropouts severely limit their earning potential, increase the likelihood of continuing a cycle of poverty and are far more likely to land in jail. In fact, an African American male without a high school diploma has an almost 70 percent chance of becoming imprisoned by his mid-30s, according to a recent report by the Brookings Institution. Nearly 28 percent of Baltimore City public high school students fail to graduate. At the school my son attends, nearly 100 percent of students graduate and attend college directly after high school.

Last May, Dawnta’s mother, Tanika Wilson, sobbed at the press conference after her son’s arrest. She told reporters she “tried to do everything she could to get her son back on the right track.” Apparently, she also pleaded with juvenile services to detain her son after he’d been caught stealing vehicles, rather than allowing him to be on house arrest, which he evaded. She blamed Baltimore’s Department of Juvenile Services for releasing him, saying it “failed her son.” But in all likelihood, there were many, many factors that failed Ms. Wilson’s son well before he found himself in the hands of Baltimore’s juvenile detention system.

“My son is not a killer. He’s not a violent type of person,” Ms. Wilson told reporters. “He’s scared. He’s afraid.” My son would be scared too, as I believe any kid facing a lifetime in jail would be. Unfortunately, after time in prison, Dawnta Wilson’s interior may well match that tough-guy exterior pictured on his 16-year-old mugshot. And that’s enough to make any caring mother cry.

Infants May Not Be as Immune to Measles as Thought