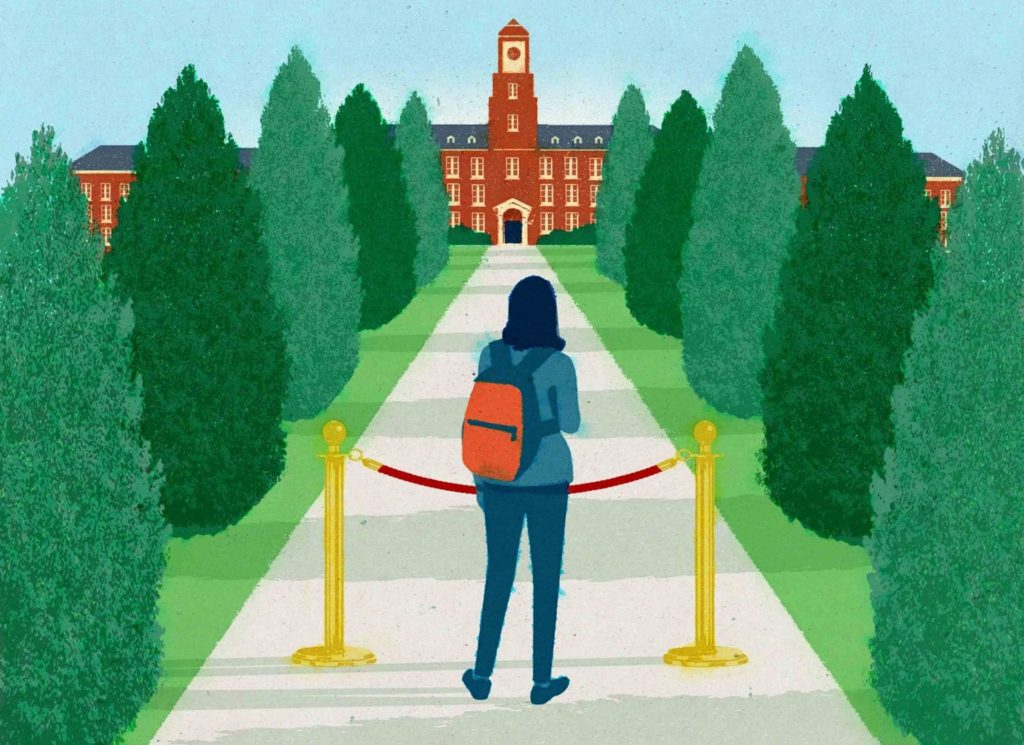 Article originally published in the On Parenting section of the Washington Post on March 5, 2019.

Anita Walia’s daughter had always been an overachiever. She made the girls’ varsity soccer team as a high school freshman, earned good grades in the most challenging courses at the private school she attended and received high marks on standardized tests. So, when it came time to apply to colleges in fall 2017, she felt ready. But she wasn’t prepared for what happened next.

Walia’s daughter was rejected from her top two college choices. That both of the highly selective institutions accepted fewer than 10 percent of applicants did little to alleviate her feelings of dejection. “For my daughter, it became, ‘I’m not good enough,’ ” recounted Walia, who lives in Baltimore.

It’s a scene that will play out in countless homes across the country from now through the spring, as high school seniors learn that, despite their best efforts, they did not get into their dream college. Often, it’s equally dumbfounding to their parents. “It seemed so overwhelming and complicated to me,” Walia said of the college-admissions process.

Indeed, the process has become much more fraught than it was when parents of current high school students went through it. Then, applying to a few colleges was the norm. “Now, students are applying to a dozen or even more,” says Mary Alvord, a psychologist based in Rockville, Md., and co-author of the book “Resilience Builder Program for Children and Adolescents.” Case in point: In its fall 2018 semester, UCLA hit a record number of applications — nearly 114,000 — and accepted about 16,000, about 14 percent.

In response to ever-lower acceptance rates at selective colleges, some families feel pressured to start preparing their children years in advance of the actual college application date. “In this area, it starts in elementary school, with kids thinking about building up their résumés,” Alvord said. But, as statistics reveal, even years of carefully preparing children for admittance to highly selective colleges — with endless tutoring sessions, loads of extracurricular activities, SAT prep classes and more — offers no guarantee.

Concentrate some of that energy on teaching kids how to be resilient, experts say. It’s an attribute most kids are born with, points out Florida-based psychotherapist Amy Morin, author of “13 Things Mentally Strong Parents Don’t Do.” But today’s parents often don’t allow their children to act on this natural instinct, she says.[

“Parents tend to rescue kids, to step in and spare them from some sort of pain, thinking failure will be too much to handle,” Morin says. As a result, she notes, many parents end up acting more like their kids’ personal assistants or concierges than guardians responsible for raising independent adults. “You don’t have to throw your child to the wolves, but you can let them fail a homework assignment,” she says.

Alvord suggests parents spend less time saving their children from pending failure or discomfort and more time engaging them in becoming responsible members of their family. “Even a toddler can help push a recycling container,” Alvord says.

Alvord has witnessed the fallout from well-meaning parents who coddle their children through high school. “They edit their work. They remind them of deadlines. Then all that scaffolding disappears in college,” she said. For many, it begins unraveling when they open the email from their first-choice college and learn they’ve been rejected.

Well before applicants hear from colleges, parents can take proactive steps to head off their children’s discouragement should they get rejected.

For starters, many experts suggest de-emphasizing the “first-choice” idea and focusing instead on building an application containing multiple schools, all of which a student would be happy to attend. “That way, it doesn’t feel so loaded,” says Tara Maglio, director of college counseling at Episcopal High School in Alexandria, Va.

This advice applies even to students with a strong shot at gaining admittance to highly selective colleges, says Michelle Muratori, senior counselor at the Johns Hopkins Center for Talented Youth. “By the time they’re ready to apply to colleges, we help students identify those schools that will meet their needs,” she says. Given the competitive nature of college admissions, she adds, this process often involves expanding families’ notions of acceptable options.

Others are even more direct with families. Nancy Federspiel, an educational consultant in Bolton, Mass., tells her clients that getting into a top-tier school is a bonus, but to plan on not getting in. “No matter how good your student is, they’re going to get rejected,” Federspiel says.

It’s important for families to recognize that there are many factors in the college-admissions process over which they have no say. For instance, you can’t control how many qualified applicants will apply to any particular school, or know what a school is looking for in a given applicant pool. “I tell families: ‘Identify what is within your control, and focus on that,’ ” Muratori says.

There’s no controlling how a student will respond to a college rejection notice. But parents can, and should, control their own response, experts say. “Stay calm,” Alvord says.

Episcopal’s Maglio agrees. “If they have an emotional response, don’t match their intensity,” she advised. It won’t help anything.

But that doesn’t mean discounting a child’s deep disappointment.

That disappointment is real, and parents should acknowledge the pain, Alvord says. “Telling them ‘You’ll be fine’ is not helpful,” she says. Instead, offer emotional support and let the child have time to feel hurt. But beware of negative reactions that linger.

Maglio cautions parents to be on the lookout for kids reacting personally. “Particularly if you’re hearing from your kid, ‘I’m not good enough,’ try to really quickly get in and get a reset,” she said.

If an applicant dwells on the rejection too long, Muratori suggests parents find out what thought or belief is replaying in their child’s mind, and challenge it. For instance, the child may think the rejection means he’s not smart enough. “Then I might ask, ‘What is the evidence for that?’ ” Muratori says. The truth is, she explains, the most selective schools only have space to admit a fraction of qualified applicants.

At some point, students who face rejection need to start focusing on plan B. Here, too, parents can play a supporting role. “Help them embrace the options they do have and let go of a path that is not available to them,” Muratori says.

Fortunately, experts say, 17- and 18-year-olds tend to bounce back from rejection quickly. “On graduation day, they can barely remember the thing that happened just months ago that seemed so horrible,” Maglio says.

Even when the sting of getting shut out of a top choice lingers, students can thrive at a different school. When asked how her daughter is faring a semester into her freshman year at college, Walia responds: “It’s good. She seems happy.” Pausing, she adds: “But I still think she feels the pain of rejection from those schools. Not that they would have been better for her.”