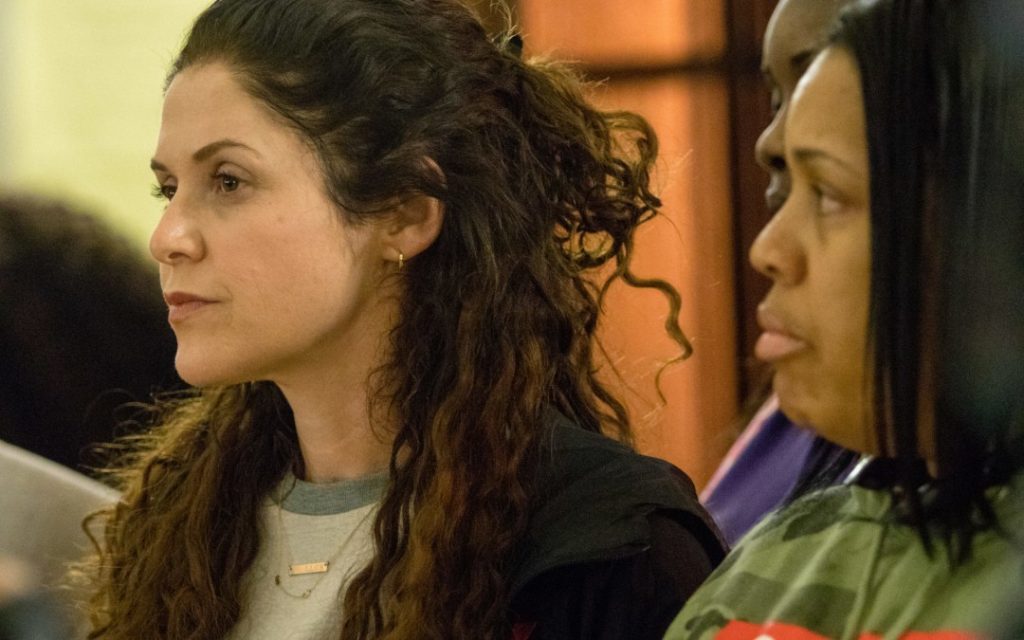 Amanda Lipitz grew up loving musicals and learning how to give back. These passions — plus a Bachelor of Fine Arts in theater from New York University’s Tisch School of the Arts, an internship at Nickelodeon and a post-graduate job with a Broadway producer — put the 36-year-old Owings Mills native on the entertainment industry fast track.

By 24, Lipitz had produced Broadway’s “Dirty Rotten Scoundrels,” followed by the Tony Award-winning “A View from the Bridge” and “The Humans,” also a Pulitzer finalist, among others. Lipitz also created and produced the groundbreaking MTV series “Legally Blonde the Musical: The Search for Elle Woods.”

But Lipitz’s foray into creating documentaries led to her most significant achievement to date. The feature-length documentary “Step,” directed and produced by Lipitz, follows the first graduating class of an all-girls high school in inner-city Baltimore as they compete on the school’s step team and strive to be the first in their families to attend college — all against the backdrop of Freddie Gray’s death in April 2015 and the subsequent unrest in Baltimore. Premiering to rave reviews at the 2017 Sundance Film Festival, “Step” was acquired by Fox Searchlight and opens in theaters nationwide on Aug. 4. Lipitz, having just touched down in New York after a trip to Israel, recently talked with Jmore about “Step.”

How did the idea for “Step” come about?

I was making short films about girls education on the side. I did some film work with the Young Women’s Leadership School in New York; I really loved my work with first-generation students going to college. I suggested to my mom that she might want to look at this model, that maybe there would be a way to replicate it in Baltimore.

Within a few years, the Baltimore Leadership School for Young Women opened its doors to 120 girls, all chosen by lottery. I was filming in the school for fundraising, and the girls invited me to film them stepping. I fell in love with these girls.

Explain the art form of stepping.

I was unfamiliar with step. I didn’t know about its rich history from Africa. It’s primarily a collegiate sport today. I think it’s incredible how these girls, at 11 years old, started this step team. They didn’t know or realize this was going to be something that would keep them connected to the school.

One student in the film named Blessin Giraldo galvanizes the girls to start this step team.

I was hearing about Blessin. She came up to me when she was 11 and said, “You’re a Broadway producer? I want to be on Broadway.” When I first saw the step team, Blessin had everybody lined up. They started stepping — it’s the footage you see at the beginning of the movie, against the backdrop of the unrest in Baltimore City after Freddie Gray’s death.

How did the unrest factor into the film?

I knew there were amazing things happening in Baltimore despite the negative national media attention. And I knew how affected these girls were by Freddie Gray’s death. There was tremendous hope in Baltimore, embodied by these girls.

Did anything that happened to them during the course of filming surprise you?

When I heard the power [had] been turned off in [student] Cori’s house, I was shocked. When [student] Meisha says, “I always wanted to be a police officer,” I was like, wow.

Speaking of surprises, how did you feel about your film being selected for the Sundance Film Festival?

I can’t believe we got into Sundance. I truly have to stop sometimes and pinch myself.

Nineteen of the 21 young women in the documentary accompanied you to Sundance. How’d that happen?

As soon as we got in, I said, “They’re coming.” An amazing executive producer found housing for all of them. We also had teachers chaperone from school. Bloomberg Philanthropies paid for the flights, Vulcan Productions provided funding and covered costs. There were a lot of very generous partners. [The students] had the time of their life.

Any other exciting residual effects of the documentary’s success?

We met Michelle Obama. Next week, we go to the Essence Festival. We’re going to be in L.A. for a week and a half, then they perform on “So You Think You Can Dance.”

From the proceeds of the film, [the producers] gave all 21 girls scholarships. We set them up with 529 [college savings] accounts. I called T. Rowe Price and asked if they could help. Representatives of T. Rowe Price had dinner with the girls and their families, and explained how the accounts work.

Why should people take the time to see this film?

You turn on the news, you see hopeless situations, and this film is exactly the opposite. It is set in Baltimore, but it could be any city in America. It’s important to feel hopeful.

If these walls could talk: artist brings flair to home design

Annie Milli Wants You to Live in the City