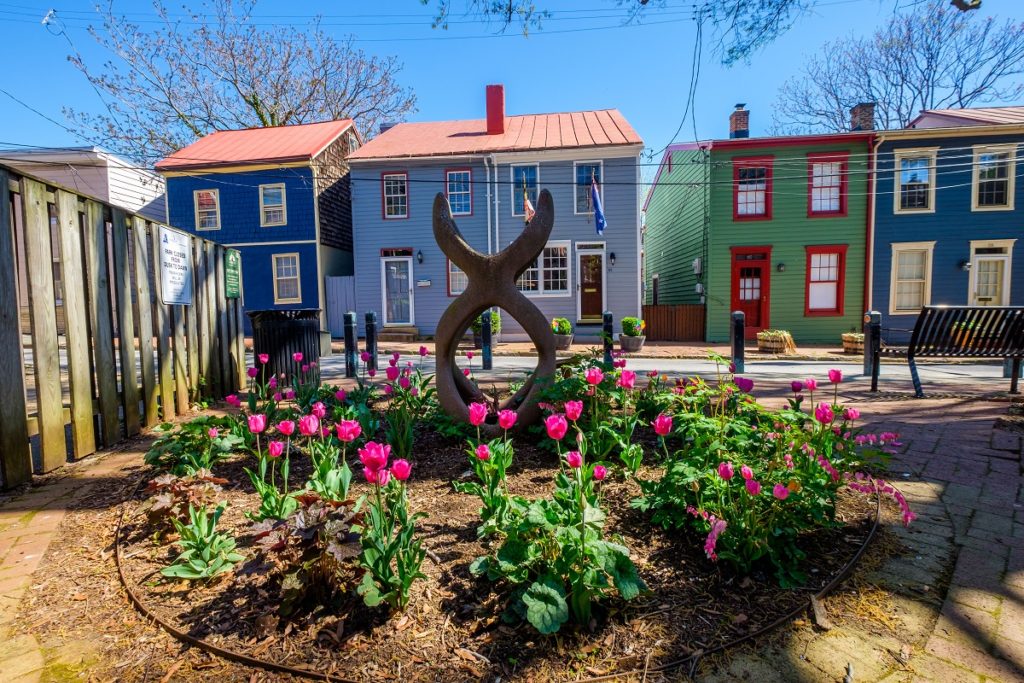 Annapolis has long been considered a cultural hub. In colonial days, it was referred to as the ‘Athens of America’. Today, it continues to boast a strong tradition of visual and performing arts institutions. But there’s more. In Annapolis, you’ll find a range of free-standing public art. Some of it informs observers about a particular historical figure or event. Other pieces aim for pure delight. Still others intrigue. Here’s a small sampling of the fascinating public art you’ll find displayed throughout Annapolis.

What: The Thurgood Marshall Memorial is dedicated to first African American Supreme Court justice, one of the great figures in civil rights history. The memorial consists of a group of bronze figures, including an eight-foot bronze statue of Justice Marshall as a young lawyer, positioned on a granite pedestal and presiding over two children seated on a nearby granite bench.

Where: In the public square in the center of Lawyers Mall, also known as State House Square, outside the State House in downtown Annapolis.

Where: Inside Gate 1, the main gate to the Naval Academy campus, at King Georges Street and Cooper Road.

Who: Billy the Goat is the creation of Clemente Spampinato, an Italian-born sculptor (1912-1993).

What: A sculpture consisting of five broken arcs made of weathered wood, suggestive of whalebones or the ribs of a ship.

Where: In the center of Annapolis’ Westgate traffic circle.

Monument to French Soldiers and Sailors

What: A bronze plaque of a heroic female figure stands as a memorial to nameless French soldiers and sailors who sacrificed their lives in 1781 during the Revolution for America’s independence.

Where: King George Street at the east end of College Creek Bridge, behind the boat house, on the campus of St. John’s College.

Who: Joseph Maxwell Miller, a sculptor (1877 to 1933) who created this and other well-respected pieces, some of which remain part of the Maryland State Art Collection today.

What: A crypt containing the remains of John Paul Jones, a Naval War hero during the Revolution, interred in a 21-ton sarcophagus that is embellished with bronze sea plants and surrounded by columns of black and white Royal Pyrenees marble.

Where: Calvert and Bladen Streets in downtown Annapolis, in front of the Treasury Building.

What: This full-size replica of the Liberty Bell is one of dozens cast in 1950 by the U.S. Department of Treasury in capitals around the country.

Where: On the front lawn of the campus of St. John’s College, at College Avenue & Prince George Street.

Who: the U.S. Department of Treasury

Hatching the Arts with the West Street Chicks

What: An engaging collection of colorful, five-foot tall chicken statues have been installed as public art to attract attention to the Arts District. Each well-dressed, over-sized chicken is a unique work of art offering a perspective on some remarkable aspect of Annapolis. Chickens were chosen in 2012 as a tongue-in-cheek art form in recognition of a then ongoing City Hall debate concerning backyard poultry.

Where: On the grounds of properties in the Capital Central Arts District, from downtown Annapolis’ Church Circle to Westgate Circle, the Stanton Center to Maryland Hall, Bates Middle School and more.

Who: Amateur and professional arts designed the patterns of the Chicks, a project of the Anne Arundel Arts Council.

What: A large-scale community public art project consisting of digital reproductions of artwork, in the form of collages, murals, and banners

Where: In public places throughout Annapolis including the exterior walls of buildings, in public squares, and other visible spaces.

Who: Local professional working artists, school-aged art students, and others. The public art project is the brainchild of ArtWalk, a local nonprofit organization that digitally reproduced and hung the artists’ photographs and illustrations in public spaces to beautify historic Annapolis.

What: A sprawling mural on the external wall of a building depicts a realistic scene of one of Annapolis’ favorite summertime traditions: Wednesday night sailing races.

Where: At the corner of Chinquipin Round Rd and Margaret Ave in Annapolis.

Who: Annapolis native and working artist Cindy Fletcher Holden, who says this about the piece: “It celebrates Annapolis sailing from a vantage point other than a boat.”

What: This whimsical mural of various animals was painted at the request of a young local boy whose father owns the building.

Where: On the side of the building next to the Boatyard Bar and Grill on Severn Avenue and4th Street in the Annapolis neighborhood of Eastport

Who: Annapolis native and working artist Cindy Fletcher Holden, who says about the piece: “He [the muse behind the mural] wanted me to paint a turtle. Then he wanted me to add a dog, a cat, a mouse. Then, the next thing you know, it had 25 or so animals on it.”