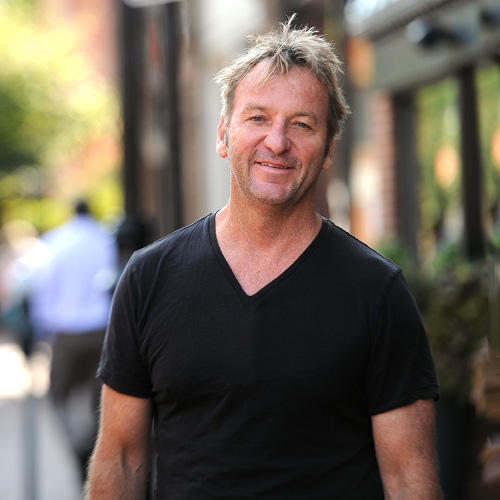 On a recent hot August afternoon, I sat down at a table in the shade outside Metropolitan Kitchen & Lounge (169 West St, Annapolis) with the restaurant’s co-owner Gavin Buckley. Almost everyone who walked by stopped to chat with Gavin, making me feel like I was in the presence of a local celebrity.

In addition to owning four successful restaurants in town, Gavin and his business partner Jody Danek are strong supporters of the local arts scene—particularly in the burgeoning Annapolis Arts & Entertainment District along ‘inner West Street’, between Calvert Street and Spa Road. Gavin serves as treasurer for the Inner West Street Association, which officially took over management of the Annapolis Arts and Entertainment District as of July 1, 2015. And, with his lilting Australian accent and open, easygoing manner, Gavin seems to invite conversation. He’s not afraid to invite controversy either, if he believes it will push the town in a more progressive direction. In a conversation with naptownlocals.com, Gavin shared some of the exciting ways he and Jody Danek are helping to make West Annapolis a more colorful place to visit and hang out.

In addition to being a restauranteur, you’re a strong patron of the local arts community. And, in many ways, it seems that your support for the local arts is directly connected to your restaurants. Perhaps the most recent example of that is the large mural painted on the front of your restaurant Tsunami, at 51 West Street, during the First Sunday Arts Festival in Annapolis this past June. Could you share how that came about?

The stars kind of aligned. We had peeling paint on front of the restaurant building. We knew we needed to get it painted. We also had access to a world class muralist, Jeff Huntington. Someone donated a cherry picker so the muralist could reach the second level of the building. The First Sunday Arts Festival was coming up. All those things aligned.

I understand there’s been some controversy about the modern mural, which depicts a Buddha alongside a screaming nurse, based on a scene in an old Russian movie.

That’s right. I did a little bit of research regarding the need to gain permission to paint the mural from the Historic Preservation Committee. There’s some controversy, since we’re on the very edge of the historic district. There’s a lot of ambiguity in the [historic preservation] code. That said, we did know the mural would be controversial. We like that. We think it has started a conversation we need about public art in public spaces. We’re fighting the fight on the mural. We want public art to grow.

Why is it important for you that Annapolis grow its public art?

In a lot of other cities, the arts drive their agenda. In the cities we love, like Austin and Charleston, the arts are front and center. We feel like we can make the town more relevant by making it a bit cooler, artsier.

Would you say the controversy surrounding the modern mural is somewhat metaphorical for the broader struggle going on in Annapolis between the city’s historic roots and the pursuit of newer, modern additions?

We love historic Annapolis. The town looks like a postcard. But we believe the two things—the historic district and the arts & entertainment district—can coexist.

Another very visible example of progressive, public art is the placement of decorative five-foot chicken sculptures that began cropping up throughout the Annapolis arts district last year, one of which was installed in front of your restaurant, Lemongrass. Talk a little about what was behind that.

Jody, my business partner, and I came up with the plan for businesses to install the chicken sculptures and artists to decorate them. We wanted a visible way to connect the first block of West Street to Maryland Hall. The general idea was to define the arts district.

Clearly, these two examples—the modern mural on Tsunami and the hatching of colorfully painted chicken sculptures—are intended to draw attention to Annapolis’ burgeoning arts district. Talk about the impact of these and other broader arts-based initiatives on the area of ‘Inner West Street’.

We like to say we’ve gone from the ‘red light district’ to an arts district. Previously, this was not a street where people walked at night. In 1999, when we opened Tsunami (51 West Street), our first Annapolis restaurant, people wouldn’t park past it. The area has definitely come a long way.

Even two years ago, people weren’t calling this the arts district. Now they are. Lots of arts initiatives, like the Sunday Arts Festival and the Fringe Festival, are initiated and driven by the business people who reside on West Street. All of these initiatives so far have been privately funded. Now that we’ve become a legitimate arts district, we can file for grants. We don’t have to rely on our own funding.

Two of your restaurants, Lemongrass and Metropolitan, are in Annapolis’ Arts & Entertainment District. At Metropolitan, you don’t only serve up great meals and drinks; you also promote performance and visual arts, correct?

We encourage original music at Metropolitan, where we offer a 100-seat live music venue. We even bring in the next generation of kids coming through the music scene to showcase here and have experiences playing before a live audience. We also exhibit the work of local artists. Another unique live music experience we offer about once a month, this one at Tsunami, is “Gospel and Sushi Happy Hour”. It involves a 12-person gospel band. It’s a different type of entertainment you won’t see anywhere else.

Do your efforts showcasing local musicians at your restaurants have a connection to the music history of Annapolis?

We actually have a big, long-term goal for drawing attention to the music history of the area, possibly with the introduction of a two-day music festival. Annapolis once had a thriving music scene.

During the 50s and 60s, when Anne Arundel County was segregated, there was a place called Carr’s Beach (now Chesapeake Harbor), a summer haven for African Americans where the coolest people on the planet in music came: soul musicians Little Richard and James Brown, jazz legend Billie Holiday. Carr’s Beach was a major stop for these legendary artists.

Another little-known fact about this town’s music history is that Jac Holtzman founded Elektra Records in his St. John’s College dorm room, going on to sign bands including The Doors and Queen, some of the most influential bands of last century. There’s also the late Ahmet Ertegün, another St. John’s College alum, who founded Atlantic Records. That’s the modern history we want to get in front of here in Annapolis. It wouldn’t have been the capital of America if it hadn’t been a cultural center. Annapolis’ cultural significance should be paramount. We think that by showcasing the town’s phenomenal music history, we can make it more interesting to certain demographics, like millennials.

It seems as if there’s a strong base of artists here already. Do you think it’s a matter of building on that base?

Artists and musicians are drawn to the town of Annapolis. We want to make it interesting enough for them to want to stay. It’s such a livable place. You don’t have to live here for long before you know the guy pouring beers at the local pubs, the guy playing music at local venues. It’s got a great little village feel.

On The Record: Jewish Media Stars in Our Midst

Big Fish: Sharon love on relationship violence, her foundation to end it, and daughter yeardley

At the theater with Lucinda Merry-Browne