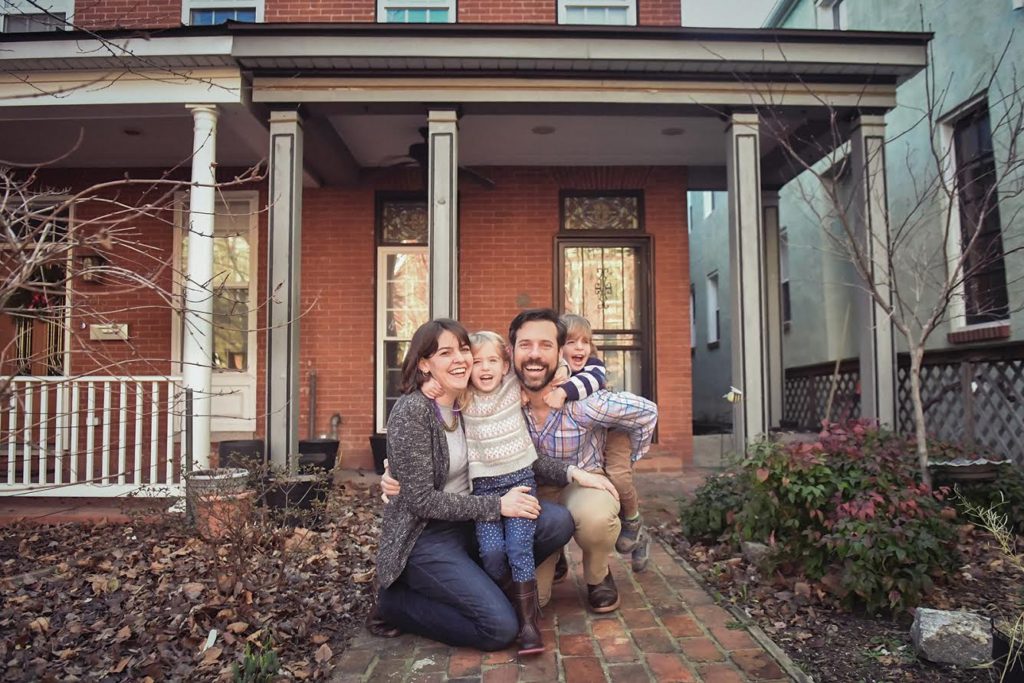 In 2001, California native Patrick Gutierrez and his wife, Sacha, moved to the Baltimore City neighborhood of Brewers Hill, where they lived happily for several years. But in 2010, with their family expanding to include two young daughters, their living quarters started feeling cramped. So they did what many other young professionals-turned-parents who live in Baltimore City do—sort of.

“I gave my wife a map of the city and a dollar figure, and asked her to stay within both of them,” Gutierrez says. She did, and the Gutierrez family currently resides in Taylor Heights, the very northeast corner of the city. There, they enjoy many of the benefits of suburbia: a single-family home, a driveway and a backyard with room to run and play. But they’re still close to the amenities they enjoyed downtown, and they appreciate the sense of community they’ve found in their tight-knit neighborhood. They also remain proud Baltimore City residents. (Full disclosure: Gutierrez ran for Baltimore City mayor in 2016.)

Historically, many young city residents considered fleeing to the county as soon as they receive a positive pregnancy test, but that trend is slowing. Increasingly, couples who fall in love with Baltimore City are staying committed to urban living, even as their families grow.

Anecdotal evidence suggests that the choice to stay in the city and raise a family is indeed an emerging trend, one that stands in stark contrast to years of suburban flight by middle-class families. That more families are choosing to stay put in the city, however promising, does not seem to be having any significant impact on Baltimore City’s overall growth. Recent census data show only very modest growth in Baltimore City. Between 2010 and 2015, Baltimore City’s growth was up just .1 of a percent, a tiny fraction compared to neighboring counties such as Anne Arundel and Howard County, both of which experienced an almost 5 percent increase in population growth during that same period.

But for a city like Baltimore that, lately, has seen more than its fair share of attention for all the wrong reasons, namely violence and unrest, even incrementally positive changes to its population feel fairly victorious. The passion of city dwellers committed to raising their kids in the city only serves to reinforce that feeling. Herein, several city dwellers share why their excitement about raising kids in Baltimore City outweighs their concerns.

A sense of community

Allison Pendell Jones, her husband, Jay, and their two children, ages 10 and 5, live in Ridgely’s Delight, a little neighborhood of about 500 rowhomes tucked between Martin Luther King Boulevard and Oriole Park at Camden Yards. The high-density neighborhood makes it easy to get to know your neighbors. “We’re very close with a number of our neighbors. We all support one another. We have a great sense of community that our kids have grown to appreciate as well,” Jones says.

She describes how their baseball-loving family routes for their now-home team (Jones is originally from the Midwest), the Baltimore Orioles, at Camden Yards in a section regularly dominated by their family and about 30 other neighbors. Being able to walk to the stadium makes being such spirited fans simple. Opening Day at Camden Yards, says Jones, feels like a national holiday, as her kids always get out of school to attend the game with family and neighborhood friends.

Alice Kistner, who lives across town in Canton with her husband and two-year-old son, also relishes the sense of community she’s found in her city neighborhood. She and her son have met lots of friends in a playground within walking distance from their home, Kistner says. She also feels a similar level of connectivity at her place of employment, Mahaffey’s Pub, where she’s been the manager for almost 10 years. “It’s a great family bar,” says Kistner, who often walks the short distance to work.

Daniela Rodriguez, who lives with her husband and three-year-old twins in the East Baltimore neighborhood of Fells Prospect, also walks to her job at nearby Johns Hopkins. That’s not the only place her family walks.

Rodriguez ticks off a number of places that she and her family reach by foot: area restaurants, Fells Point, local markets and events. Their favorite walkable destination? Patterson Park. “The proximity to the park has been invaluable,” says Rodriguez, who considers their family heavy users of the sprawling, historic urban park. In addition to family strolls, the park is the site of events that they’ve attended, like the Great Halloween Lantern Parade, which has morphed into a day-long festival and culminating evening parade.

Canton resident Kistner so loves the easy accessibility to the city’s many amenities and attractions that she’s postponing placing her son in preschool for a year. Together, she feels, they can create their own urban field trips. To Kistner, it makes perfect sense. To others, not so much.

Sometimes, Kistner acknowledges, she endures questions from friends who live outside the city and say things like: “Why do you want to live where there’s no grass?”

Her retort? She tells them the whole city is her backyard. She also has a question of her own: “I don’t understand why people would move to the suburbs where you can’t walk anywhere,” Kistner says.

The notion of wanting to explore your own city on foot implies a certain degree of openness that dovetails with yet another reason many parents say they like raising their children in the city.

“I want my kids to be exposed to people of all races, ethnicity and economic status. There’s a greater level of diversity in the city,” says Fells Prospect’s Rodriguez, who grew up in Venezuela.

Ridgely’s Delight resident Jones echoes Rodriguez’s sentiment, and notes that their local public school possesses a student body diverse both racially and economically that, in turn, she believes enriches her children’s perspectives. “It helps them to become interesting and appreciative of diversity, and to understand that not everyone’s the same,” she says.

Being open-minded also allows many city dwellers to accept the challenges that can come with urban living. Fells Prospect’s Rodriguez, for example, says that she and her husband have no intention of moving out of the city. She also acknowledges that she’s uncomfortable walking in her neighborhood late at night by herself. But Rodriguez considers worries like crime and parking challenges mere “micro challenges.”

Not only does she feel that the crime occurring in her neighborhood is less serious than that which takes place in some other city neighborhoods, Rodriguez says it doesn’t pose the same concern to her as what she sees as bigger “macro challenges”—things like inequity in economic development and, on a more basic and immediate level, food deserts (a lack of grocery stores or other places to buy fresh, nonperishable foods) that exist in certain city neighborhoods, and the fact that so many students who attend school with her children qualify for free or reduced lunch.

While Rodriguez appears concerned primarily with the plight of others around her, it’s not uncommon for families—even those who reside happily in the city—to be wary of urban woes that may directly affect them. Common nagging concerns include not just crime, but also the cost of property taxes and the quality of public schools, particularly as children get older.

Canton’s Kistner, for instance, speaks excitedly about Hampstead Hill, the public elementary school for which their neighborhood is zoned. “It’s supposed to be one of the city’s top-rated [elementary] public schools,” she says. It runs from Pre-K through eighth grade. “That gives us nine years to figure out next steps,” Kistner says, sounding somewhat apprehensive about the future.

Whether the concern is crime, quality of schools, taxes or something else altogether, city expert Annie Mills urges prospective homeowners to do their research before passing judgment or making decisions about a given neighborhood.

Mills, marketing director of Live Baltimore, asserts that knowing the facts about an area and, as important, honestly assessing one’s own tolerance level for them can lead prospective homeowners to informed and satisfactory decisions.

“We always tell people to look at the different types of crime that’s occurring, to talk to people in the neighborhood who can tell you what it’s like first-hand, and to look at the map … Baltimore is 92 square miles of land and there’s a lot of diversity happening here,” says Mills of Live Baltimore, an independent nonprofit organization committed to promoting the benefits of Baltimore City living.

Prospective homebuyers can explore Live Baltimore’s website, livebaltimore.com, which offers interactive maps of city neighborhoods as well as links to Baltimore’s crime map, as one way to conduct this type of research. The website also answers questions regarding other hot-button issues like property taxes and homebuyer financial incentive programs, of which there are more than 40. Concrete information provided by sources like Live Baltimore can, in turn, help debunk misperceptions.

“I tell people that while our [Baltimore City’s] tax rate is certainly higher than in the surrounding counties, the purchase price of homes in the city is much lower,” Mills says. Plus, she says, long-term homeowners who purchase in the city can ultimately end up paying less than if they were to buy in the county, since a lower purchase price means less mortgage interest paid over time.

Clearly, getting the facts about a given community is an important consideration when choosing whether or not to reside there. But there’s also something to be said for the opinions of existing urban dwellers. And in Baltimore City, scores of families across its 250-plus neighborhoods are willing to weigh in.

“We have our challenges. But it’s that love and passion that we have for city living that keeps us here and wanting to make things better,” says Taylor Heights resident Patrick Gutierrez. BC