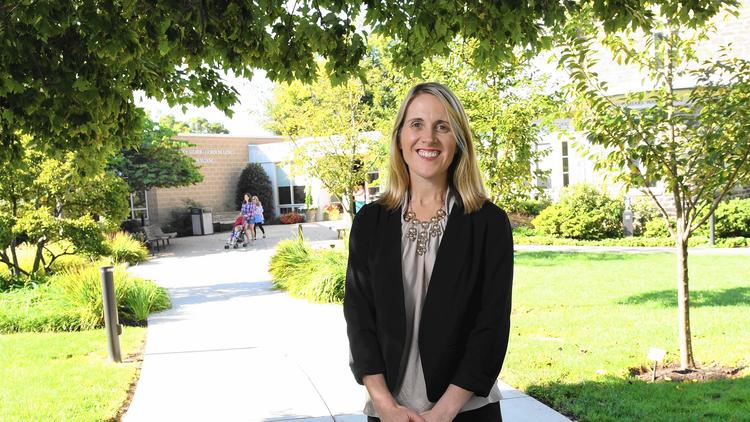 Originally published on October 11, 2016 in the Baltimore Sun.

On the first day of the 2016–2017 academic year, as students at Roland Park Country School filed into the building, they were greeted by two contrasting figures: bagpiper musicians, a longstanding “first-day-back” tradition at the school, and new Head of School Caroline Blatti, the first in 25 years and only the seventh in the school’s 100-plus-year history.

Blatti, who was formally installed on Oct. 7, succeeds long-term former head and alumna Jean Brune, who led the school to growth and expansion over a 24-year period. Following Brune’s departure, Blatti is tasked with a delicate balancing act: equipping the student body of the all-girls’ independent school with the complex tools demanded by a 21st-century education model while respecting decades of enduring tradition and expectations that have come to define the school.

“I feel like she’s just ready to go,” said Jenny Hovermill, a 1985 graduate of Roland Park Country and a parent of three daughters currently attending the school. “She’s intense, but also enthusiastic and warm. All three of my girls like her, and they always have radically different views.”

Indeed, Blatti appears more than ready to take on the challenge of leading into the future one of Baltimore’s most firmly established all-girls’ educational institutions, and she hasn’t shied away from introducing herself to the community in a bold manner. Blatti, an avid runner, is featured prominently in a new promotional video (available on the school’s website) sprinting through the streets of Roland Park in running attire and advising viewers — presumably students — to find their voice and embrace values including hard work, tenacity, passion and grit. Coming from Blatti, a 42-year-old Princeton graduate who has taken a rather fast track from classroom teacher to her new leadership position, these messages resonate strongly in 2016.

A century ago, Blatti’s message likely would have been lost on the student body at Roland Park Country, which graduated its first high school class of one student in 1907. Today, 610 girls from preschool through high school attend Roland Park Country’s 21-acre campus at 5204 Roland Ave. Some of the school’s unique features include a 6:1 student to faculty ratio; 16 interscholastic sports, including squash, swimming and crew; tri-school coordination that enables upper school students to take courses at neighboring schools Gilman and Bryn Mawr; a STEM Institute and a foreign language certificate, both elective offerings that upper school students can choose to earn.

During her tenure, Brune created the STEM Institute, which offers a certificate for advanced studies in science, technology, engineering and math. She also broadly expanded the school’s foreign language course selection, grew the school’s endowment from $9.9 million to more than $50 million, and doubled the faculty to around 200.

“Jean put together an amazing administrative and faculty team. She [Blatti] has inherited such strong teams,” said Catherine McDonnell, chair of Roland Park Country’s board of directors and a 1994 graduate of the school.

Blatti doesn’t seem fazed by following in the footsteps of her well-respected predecessor. “I think we both share a sense of asking what we can do to improve our offerings, and to make great decisions that maximize the potential of all students,” Blatti said. “We’re both extremely interested in curriculum programming.”

A commitment to leadership

In her former position at Hutchison School, an all-girls’ school in Memphis, Tenn., Blatti served in a number of capacities: as an English teacher, a basketball and track and field coach, and the head of the upper school. She also found time to launch a leadership program at the school, Hutchison Leads, which she said began with this inquiry: How do you know you’re teaching girls to become leaders?

The leadership program, she explained, was her response to this question. After she conducted considerable research into the best way to create it, she developed a blueprint, obtained sustainable funding, and the program became a reality.

Speaking enthusiastically about the program in which every high school student at Hutchison has the opportunity to participate, Blatti ticks off some of its key components: leadership, self-reflection, speaker series, mentorships with community leaders, in-depth projects involving citywide issues such as high infant mortality rates and low literacy, and exposure to philanthropic literacy and social entrepreneurship.

“I believe that leadership is a dynamic, life-long process; no one’s perfect at it,” Blatti said. “But especially at those pivotal high school years, why not offer these special experiential opportunities? A constellation of these experiences will allow each girl to become an evolved leader.”

While Blatti carries with her the imprint she left on Hutchison School, she says she’s in no rush to make changes to Roland Park Country School, and instead says she’s in “listening mode.” By early September, she already had met with a majority of faculty members, as well as a sizable representation of parents and alumnae, to hear their perspectives.

“It’s important that we think about what we already do well here, harness that and see where we want to add programming,” Blatti said.

Whether or not she’s ready to implement changes at the school, Blatti does share some strong beliefs about what girls need in order to achieve academic success today and in the future. She emphasizes critical thinking, problem solving, and hands-on learning as critical to that equation. She’s also eying community resources as a way to augment students’ education; for instance, by inviting community leaders to speak at the school and providing high school students with access to opportunities at leading local institutions such as Johns Hopkins University.

And, again, there’s the message of leadership: “They need to have a seat at the table, and to be our next generation of leaders,” Blatti said.