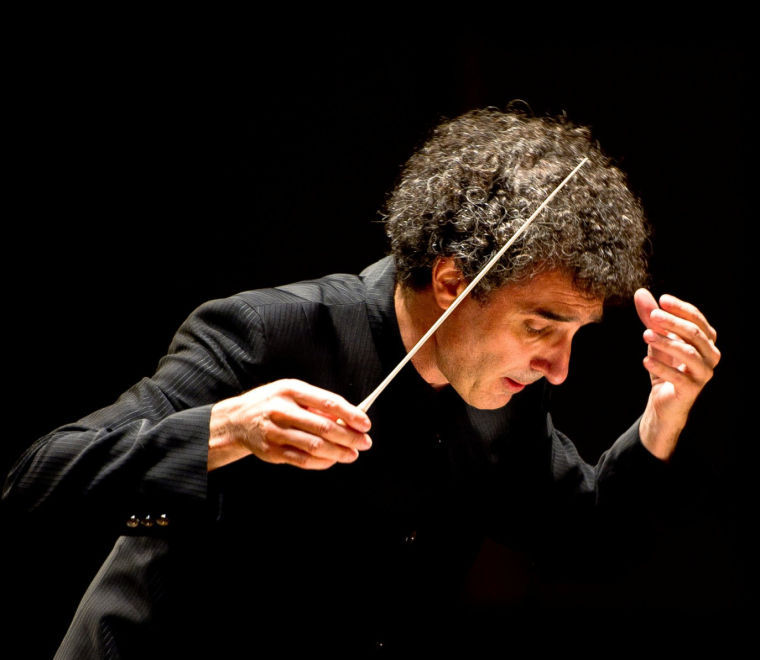 Annapolis is proud to be home to the Annapolis Symphony Orchestra (ASO). Now in its 53rd season, it continues to flourish as a dynamic artistic force within the region. Music director and conductor Maestro José-Luis Novo, now in his tenth season with the ASO, deserves much credit for the symphony’s growing success.

Hailing from Spain, Maestro Novo began studying violin at the conservatory of his hometown, Valladolid, when he was just 10. He continued his studies at the Royal Conservatory of Music in Brussels before coming to the U.S. as a Fulbright Scholar, earning both a Master of Music and a Master of Musical Arts degree from Yale University. Only afterwards did he pursue studies in orchestral conducting, via a fellowship at the Cleveland Institute of Music. Since then, he’s enjoyed a rich career throughout Europe and the U.S. as a violinist, conductor and music director, and educator.

Recently, Maestro Novo spoke to us at VisitAnnapolis.org. He reminisced about his fervent desire to become a musician from the time he was a young child, talked about the strong tradition of classical music in Europe that he and many others have brought to the U.S., expressed enthusiasm for the abundant support that the local community has shown to the ASO, and more.

VisitAnnapolis: You began your music career as a violinist. Did you grow up in a musical family?
I suppose that had a big influence. Growing up, my father played piano at home every evening. That was my first contact with music. My first instinct was to learn how to play the piano. I asked my father to teach me; he made all kinds of excuses. He used to teach music to people who were going to become teachers; he was very accomplished and had extensive music training. But my father had a hard time finding a job as a musician after the Spanish Civil War, and thought it would be better for me to look for a job in another area. I was stubborn. I talked him into signing me up at the conservatory in my hometown when I was 10 years old. Piano class was full. I said I wasn’t going to waste another year, so I signed up for violin instead.

VisitAnnapolis: You started your formal musical studies in Spain before coming to the United States as a Fulbright Scholar at Yale and then studying orchestral conducting at the Cleveland Institute of Music. In your experience, how does the passion for, and knowledge of, classical music in the United States compare to that in Europe?
I think there are passionate people about music in both places. I think that there are a lot of people here who came from Europe and have helped bring that tradition to the States. That has been really exciting for the whole music scene that’s developed in the U.S.

In Europe, classical musical has a longer tradition—it’s more linked to the culture and history of the populations. It’s a more prominent component in the culture. In the States, if you haven’t been exposed to classical music, you have to seek it out.

VisitAnnapolis: In addition to your role as a professional music director and musician, you have made time to foster music education in younger audiences. You were the Music Director of the Cincinnati Symphony Youth Orchestra and the Assistant Conductor of the National Youth Orchestra of Spain, to name a few. You have conducted many college and youth orchestras. You obviously believe in music education for young people.

I really believe that classical music advances our society in the way of thinking, communicating, integrating. When people are not exposed to music education, they lose out on that service to them.

VisitAnnapolis: The Annapolis Symphony Orchestra recently celebrated its 50th anniversary. That’s an impressive history, given factors like the small size of Annapolis and the recent recession, which hurt a lot of symphonies around the country. To what do you attribute this symphony’s ongoing success?
We are celebrating our 53rd anniversary, and the symphony has been improving and growing very steadily. I think the fact that a small city like Annapolis can support an orchestra of this caliber speaks very highly of the support this community provides.

One of our biggest supporters is Elizabeth Richebourg Rea, the daughter of the ASO Association’s co-founder, Philip Richebourg. Her father’s dreams were so important to her, and she has carried on the tradition of her father. I think there are many families that have grown up with the ASO.

We also have a great board of directors—incredibly engaged and supportive and smart—that has made many smart, financially responsible decisions when times were difficult for other orchestras.

Plus, our dedicated administration makes sure the running of the orchestra is smooth. Almost nobody sees them. But being on the inside, I can tell you we have incredibly competent people who work tirelessly to make sure the ASO is presented as professionally as possible. Having conducted in many places around the word, I can tell you it’s not easy to find an administration as professional.

Then there is our group of musicians, who are incredibly talented and dedicated. We can’t offer full-time employment, so our musicians can choose to play for other orchestras, but the main roster of our musicians chooses to play with us most of the time. They value the opportunities the ASO offers, and they deliver. The caliber of the orchestra keeps going up.

Finally, we have a great group of supporters, at large and locals—FASO (Friends of the Annapolis Symphony Orchestra). They also help with all kinds of events, fundraising, assistance with guest artists, professional activities. All of this is what makes the ASO a successful organization.

VisitAnnapolis: You’ve been with the Annapolis Symphony Orchestra for about a decade now. Talk about where you’ve taken the orchestra.
This is my tenth season. I’m proud of our orchestra; I take my job very seriously. I think everyone in the organization does. By now, roughly almost two-thirds of the orchestra has been appointed under my tenure. When I came into the symphony, there were some leadership positions available in the strings section. I was able to appoint these positions, which gave me as the musical director quick input into reconfiguring the orchestra’s strengths. Traditionally, our orchestra’s strings were not as refined as our winds and brass. I think now it’s hard to differentiate one’s level of talent from the other. They are compatible. I like to think I had something to do with that. The symphony now has a reputation, we are known now. It’s easy for us to engage top artists in the classical music world.

VisitAnnapolis: Talk about some ways in which you’ve spread the word about the ASO beyond Anne Arundel County.
We’re acquiring a wider profile. In 2008, the orchestra recorded its first commercial CD, a project I was very proud of. The CD, Three Symphonic Centuries, coincided with the 300th anniversary of the charter of the city of Annapolis. In another related activity, we held an international young composers’ competition. That attracted a lot of international attention. The winner, Narong Prangcharoen, a composer from Thailand, has gone on to become very successful. We’ve been on the American Public Media radio show, Performance Today, and on Baltimore’s classical music radio station, WBJZ. We are also starting to make guest appearances—on March 1, for example, we played at the Strathmore in Bethesda, Maryland.

In addition, we are expanding our educational programs. Recently we started a music wellness program, in which we train musicians to go into hospices. All of these things have been done in the last 10 years. It shows you we really are working hard to advance the reputation of the orchestra in many different ways.

In addition, we are expanding our educational programs. Recently we started a music wellness program, in which we train musicians to go into hospices. All of these things have been done in the last 10 years. It shows you we really are working hard to advance the reputation of the orchestra in many different ways.

VisitAnnapolis: For those who live in the region but perhaps have never seen the Annapolis Symphony Orchestra perform, what is your message to them?
Hurry up! There is no reason why people should not come to see the orchestra perform, especially now that the Maryland Hall for the Creative Arts has just undergone a major renovation. The stage and all the seats have been renovated. Improved acoustics also make the orchestra sound better. I think the transformation is mind-boggling. For those who have never heard the orchestra, I really encourage them to come once. I’m pretty sure that once they hear the orchestra, they are going to be impressed. I have heard people who come for the first time say that they had no idea how much they would enjoy it.

VisitAnnapolis: It sounds like you have a very busy schedule. Do you ever get an opportunity to spend time in Annapolis? If so, what do you like to do in Annapolis; where do you go to relax?
When I was offered the job as Music Director and Conductor for the Annapolis Symphony Orchestra, we moved right away. My wife and I didn’t have to think very much about moving to Annapolis. We do find time to enjoy the fact that we are on the seaside as much as we can. One of the simplest things we enjoy is walking downtown. It’s hard to find a city with more charm than Annapolis, with its colonial heritage. It feels very cozy and warm; it’s beautiful to walk around and enjoy the history here. In this country, 300-plus years is a long history compared to other U.S. cities. We often go to explore history outside the city boundaries also, and to eat at restaurants on the water. Of course, I love seafood. I enjoy the culture of eating crabs very much. I feel blessed to live in an area that is so vibrant and has so much to offer.

Big Fish: Sharon love on relationship violence, her foundation to end it, and daughter yeardley