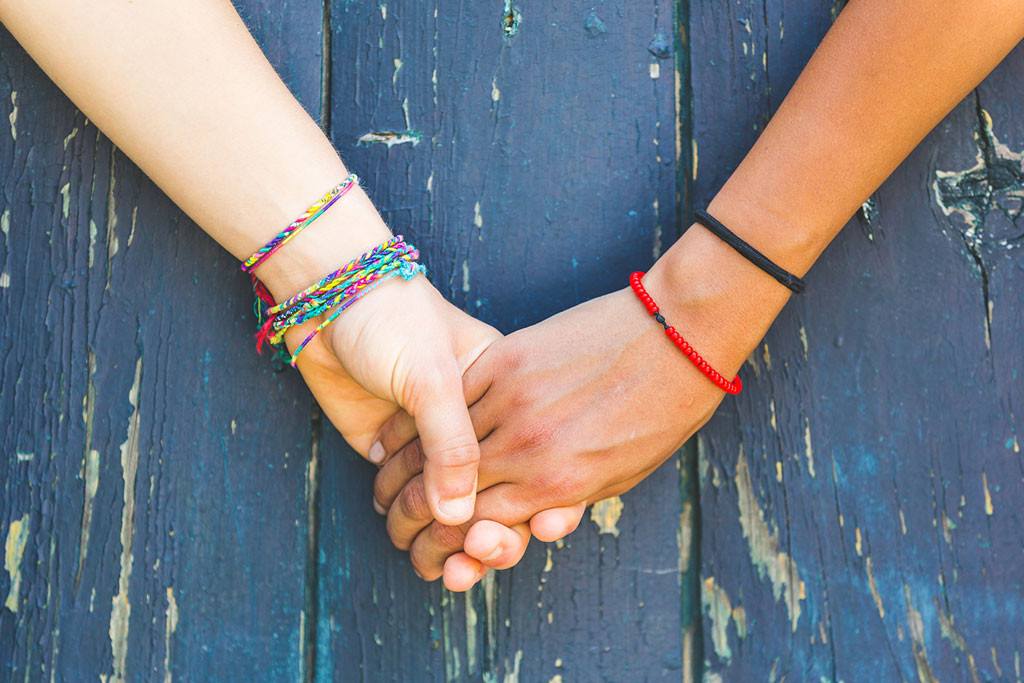 Originally published in Baltimorefishbowl.com, May 19, 2014

Fitting in. It’s what most teenagers aspire to do. Sure, there are outliers who do things like dye their hair bright colors and pierce multiple body parts to draw attention to themselves. But very few teens want to be too different. And being on the LGBTQ (lesbian, gay, bisexual, transgendered, questioning) spectrum definitely qualifies as different. Most recent statistics estimate that just 3.5 percent of adults identify as lesbian, gay, or bisexual; 0.3 percent identify as transgender. As for the under-18 population, statistics on sexual orientation are hard to find. That comes as no surprise, given that many teenagers on the LGBTQ spectrum have yet to come out to themselves, let alone anyone else. But that’s changing.

Teenagers are coming out earlier than ever, some as young as 13 and 14. In many cases, they’re finding a supportive environment upon sharing their sexual orientation—with family, friends, and at school. Three students from area independent schools took the time to speak openly to Baltimore Fishbowl about every stage of coming out: from admitting it to themselves, to sharing the news with family and close friends, to taking on advocacy roles within their schools.

Cormac Baroody, who goes by Mickey, is an easy-going freshman at Gilman School. He’s got traditionally handsome good looks, is quick to break into a smile, and speaks in a friendly, self-assured manner.

It was a charade he soon learned he couldn’t endure. “I got to the point where I thought, ‘I’m going to be a pretty sad person, and I’m probably not going to get that far in life’,” Mickey said. “Then, in my head, I told myself I was going to come out. And the sooner, the better.”

Little by little, Mickey began sharing his news with the people in his life who were important to him.

He started with his family, whom he describes as being “very supportive,” particularly his parents. Their response heartened but didn’t surprise him. “I was raised thinking that gay people are just as important as other people,” he said.

Next he would tell his friends. That started during the summer before high school, when he was at the beach with a close friend he’d known his whole life. “It was hard. It took me a half hour to get it out,” he admitted. But he was glad he did. “I felt amazing afterwards. Like a burden lifted,” he said.

It probably helped that she responded positively, as did each of Mickey’s other friends, whom he told individually. “I didn’t like the idea of coming out on Facebook. I didn’t want to just say it to the whole world without any meaningful interaction,” Mickey said.

The hardest person to tell

The hardest person to tell? Himself. “I always expected that I’d be straight,” he said, acknowledging that coming to terms with being gay takes time and, for him, was something that needed to happen before he was ready to tell other people.

Zipi Diamond, a 15-year-old sophomore at Bryn Mawr, felt similarly. “The hardest person to come out to was myself,” she said. “I really thought I was a monster. I thought, ‘I can’t be gay.’ But after a while, I started to accept myself.”

Zipi says that now, having come to terms with her sexual orientation, she doesn’t try to hide it. But she acknowledges that it can still be tough to be a gay teenager.

“It’s always easier to be the most privileged person. I’m very privileged. But, according to my sexuality, I’m not. There are just a lot of things you have to question and ask yourself, like: Should it be your right to go to the prom?”

Zipi did attend prom this spring with her girlfriend from another school. She wore a simple, cream-colored dress and a string of pearls. Her date came in a strapless dress with a slight shimmer to it. Pictures show them with arms around each other, content smiles on their faces.

Natalie Linden, a junior at Friends School of Baltimore, admits to causing a few heads to turn when she showed up at prom this year with a boy she’s dating. Previously, Natalie has dated girls.

When pressed about her sexuality, Natalie says, somewhat hesitantly, “I go with queer.” But, she adds, “I haven’t been out in the world that much. I don’t really know. It’s up in the air.”

Natalie may communicate a vague sense of her sexual orientation, but she firmly acknowledges the importance of having a safe place to explore issues related to sexual identity.

“When I came to Friends, I knew the Gay-Straight Alliance (GSA) was the club I wanted to get involved in. Being able to meet and interact with people at the GSA who identified across the entire spectrum helped me understand myself,” Natalie says.

It also helped her feel safe. “Safety is a really big thing at Friends; the ability to be yourself,” Natalie said. “No one’s actually going to attack you when you’re in school, but words mean everything in high school, especially in such a small system like the independent school community. Words are pretty powerful.”

That’s why Natalie is making a concerted effort to help other students feel safe, particularly those who may be questioning their sexual orientation. Along with some other students involved in the GSA, she’s planning an upper school-wide assembly in which some of the students who are out will share their stories. “We want to introduce ourselves to the younger students and let them know they’re not alone,” she said.

The ever-increasing presence of GSAs in high schools throughout the nation means more safe havens for teenagers to explore subjects related to sexual orientation. In the 90s, only a few dozen Gay-Straight Alliance clubs existed in U.S. high schools. Now, more than 3,000 high schools offer GSAs, part of the Gay, Lesbian, and Straight Education Network, a national organization striving to promote a positive school climate for gay students.

Every student interviewed for this story belongs to his or her school’s GSA. Zipi Diamond just got elected president of Bryn Mawr’s GSA for the 2014-2015 school year. But perhaps more encouraging than these students’ active participation is the number of students who don’t identify along the LGBTQ spectrum, yet who belong to the club. Gilman’s GSA, for instance, has about 80 members, according to Mickey. But there are less than a handful of out students at the school.

This is encouraging to those who are out, as is the prevailing attitude at schools attended by those interviewed. “At Gilman, at least, it’s hard to be homophobic. It’s not cool,” Mickey said, adding, “I’ve actually found that most people don’t really care [about sexual orientation]. People think it’s a jock school. But when you’re inside, it doesn’t look like that at all,” he said.

Teenagers who are out welcome acceptance by their peers. But sometimes, it can seem a bit contrived. “Other students are always ‘awwing’ if they see me holding hands with my girlfriend. I feel like people want to make sure that I know they like me,” Zipi said. After all, she explains, they wouldn’t ooh and ah if they saw a heterosexual couple holding hands.

Being gay is one thing. But teens with a less straightforward sexual orientation stir inquiry among their peers, even at schools like Friends, whose administration boldly touts tolerance. Natalie Linden’s twin brother, also a student at Friends, has had students inquire about his sister’s sexual orientation.

While some students find Natalie’s ambivalent sexual orientation a curiosity, she’s found solace in her teachers. “They understand what it’s like to be lonely, confused, for people not to understand. They’ve been really great about helping me through it,” she said.

Each of the students interviewed has come to terms with his or her sexual orientation, but none wants to be labeled by it: Not Mickey, who loves art, sculpture in particular; or Zipi, who is crazy about animals and even has a soft spot for rats; nor Natalie, who enjoys being part of her school’s theater program.

“I certainly don’t think it’s the one thing—not even in the top five—of things that define who I am,” Natalie said. “It’s just something that’s there.”