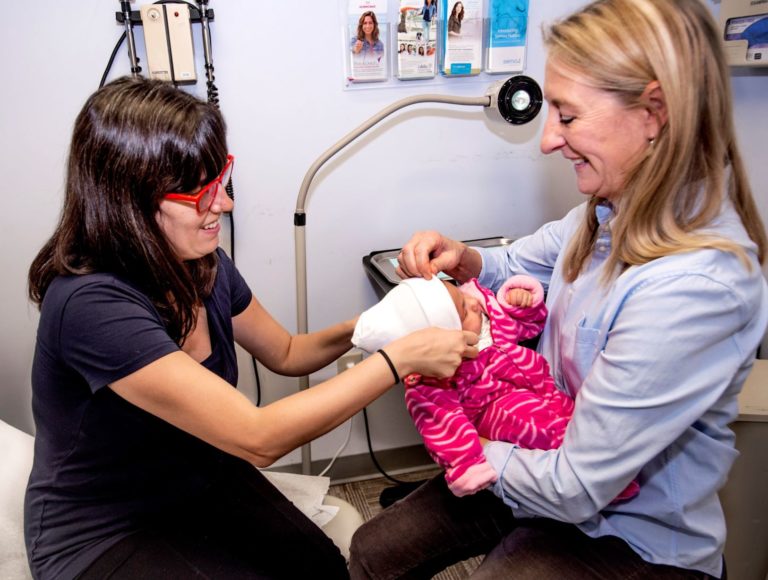 The Connecticut Childbirth & Women’s Center in Danbury is a 50-minute drive from Evelyn DeGraf’s home in Westchester. Pregnant with her second child, the 37-year-old didn’t hesitate to make the drive—she wanted her birth to be attended by a midwife, not a doctor.

DeGraf believed midwifery care to be more personal and less rushed than that delivered by obstetrics/gynecologists (OB/GYNs). She also knew an OB/GYN would deem her relatively advanced maternal age and previous cesarean section history too high-risk to attempt a VBAC, or vaginal birth after cesarean section.

But she had to drive roughly 35 miles to find a midwife because there aren’t many of them.

Despite the fact that an estimated 85 percent of women are appropriate for midwife care, midwives attend about 11 percent of births in Connecticut, said Holly Kennedy, professor of midwifery at Yale School of Nursing. By contrast, about half of all babies in England are delivered by midwives, according to National Health Services statistics. Kennedy sees a direct correlation between lower use of midwives and higher maternal mortality.

“If you scaled up midwives, you would avert over 80 percent of maternal deaths,” Kennedy said. In Connecticut, there are 211 licensed nurse-midwives, compared to 945 licensed OB/GYNs, according to state Department of Health records. Unlike some other states, which employ midwives who do not require nursing degrees, Connecticut recognizes only nurse-midwives, who hold advanced degrees in nursing and additional training in midwifery.

DeGraf’s second child was born vaginally at Danbury Hospital, assisted by a nurse-midwife employed by the Connecticut Childbirth Center. Her low-intervention delivery is common of births attended by midwives who, statistically, use fewer intervention than physicians during labor and delivery.

Cesarean sections, considered major surgery, carry well-established risks: higher rates of hemorrhage, transfusions, infections, and blood clots—all primary causes of maternal mortality, whose rates increased nationwide (with the exception of California) by 26.6 percent between 2010 and 2014, according to a study supported by The National Center for Biotechnology Information.

Midwives are also linked to higher rates of physiologic birth and fewer adverse neonatal outcomes, according to a nationwide 2018 study, which ranked states by how well midwives are integrated into regional health care systems. Connecticut fell into the bottom third. Experts say the low ranking is due in large part to a lack of access to midwives. Many would-be nurse-midwives never get the chance to train for the position in Connecticut.

“At Yale, I get at least 100 applicants for our [nurse-midwife] program. Most are highly qualified, but I can only accept 25 percent,” said Kennedy, an author of the 2018 study. She explained that most federal health education dollars are directed to schools of medicine, thereby limiting resources for midwifery education, including the ability to reimburse preceptors who oversee clinical training of nurse-midwife students.

Those who do find spots in one of Connecticut’s two nurse-midwife programs (Fairfield University offers a doctor of nursing practice in midwifery) may confront challenges to practicing upon graduation. Many face high debt hurdles, Kennedy says, and search the country for employers willing to repay their student loans. Those who do find jobs in Connecticut may be stymied from practicing to the fullest extent possible.

Cathy Parisi is director at the Connecticut Childbirth & Women’s Center, the state’s only freestanding birth center. She says that while Connecticut legislation authorizes its nurse-midwives to practice to “full scope care,” which includes admitting privileges at hospitals that credential nurse-midwives, not all hospital bylaws reflect current state statutes; therefore, some hospitals in Connecticut do not grant admitting privileges.

“Little things like that are terribly irritating,” said Parisi, who suggested several possible reasons why hospitals wouldn’t allow a nurse-midwife to practice within the full scope of her license, including pressure from physicians, medical staff or the hospital legal department or, simply, resistance to change.

Nurse-midwives follow the same standards of care as OB/GYNs, but the difference in how they deliver care has an increasing number of women gravitating to the midwifery model. The Connecticut Childbirth & Women’s Center, which at its inception about 25 years ago delivered five or six births per month, now facilitates up to 35 per month and has increased its staff accordingly, from two to five full-time nurse-midwives.

One of its patients is 25-year-old Teja Brindisi, a resident of Naugatuck, who switched her healthcare provider halfway through her first of two pregnancies from an OB/GYN practice to the Connecticut Childbirth & Women’s Center. For her second child’s delivery, she had a natural water birth delivery at the center with the aid of a nurse-midwife, an experience she called “amazing.”

It was also affordable, covered by her health insurance to the same extent a hospital birth attended by an OB/GYN would have been. With rare exceptions, all insurances cover midwifery services, including HUSKY/Medicaid, though some plans reimburse midwifery services at 90 percent of the physician rate, said Stephanie Welsh, vice president of the American College of Nurse-Midwives’ Connecticut affiliate.

“We have been fighting the battle for equal reimbursement for many years, and will continue to do so,” Welsh said.

While the cost to patients is typically the same whether they use a nurse-midwife or an OB/GYN, they may feel like they’re getting a better deal with a nurse-midwife.

“Midwifery is a relationship-based profession. One of the reasons we probably do have better outcomes is because we listen to women,” Yale’s Kennedy said.

Despite differing perspectives, many midwives and OB/GYNs work together and report a collegial relationship.

“The physicians in my practice are very receptive to midwifery input, and really value our expertise,” said ACNM’s Welsh, who practices at Manchester Hospital with six other midwives and 14 physicians.

John Kaczmarek, an OB/GYN with privileges at St. Mary’s Hospital and Waterbury Hospital, said of nurse-midwives: “I’ve learned a lot from them; for example, we don’t always have to force nature.”

But Kaczmarek was quick to acknowledge the hierarchy within his practice. “[Nurse-midwives] practice independently but know their limitations,” he said.

“They know when to call for physician help.”

That may be true, but when it comes to compassionate care, midwives seem to know no limits. “With the midwives, I felt more taken care of,” Westchester’s DeGraf said.

Workplace wellness programs work best when bosses buy into them