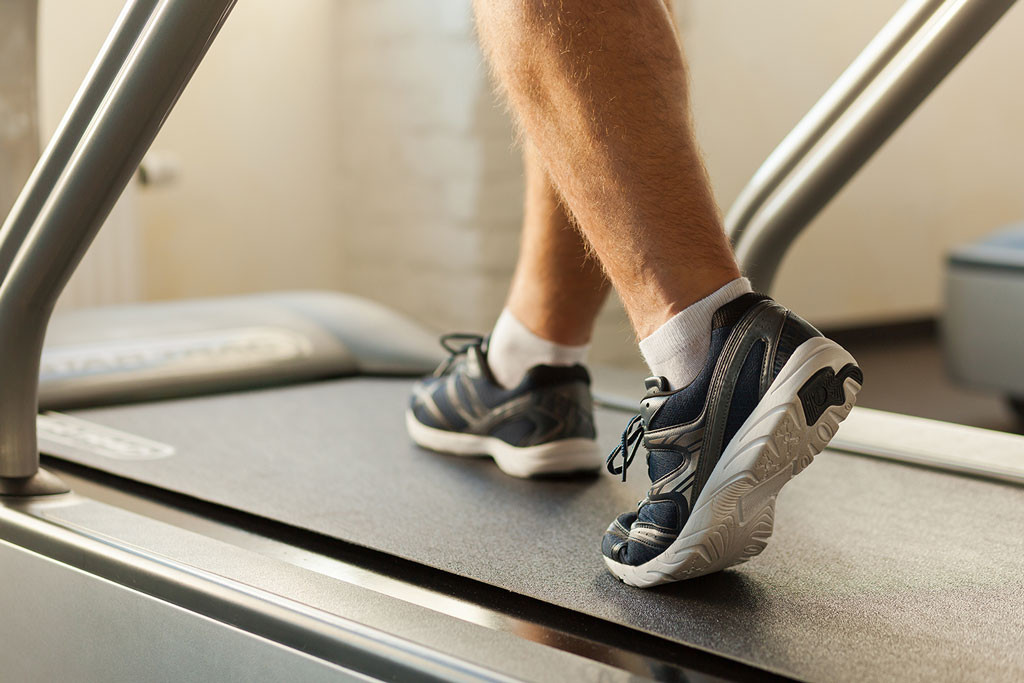 Brett Martin walks about seven miles during the average workday, which isn’t bad for a guy who rarely leaves his office.

From behind his custom-designed vertical desk, which fits snugly atop his treadmill, the 39-year-old president of a background-checking company performs the usual office tasks: checking e-mails, typing on his computer, taking calls.

Simultaneously, he maintains an easy pace of 1.8 mph at a slight incline.

“I was one of those guys who tried to get to the gym two to three times a week but never made it more than once a week,” says Martin, of Wilmington, N.C. “I felt guilty that there wasn’t enough time in the day to get there.” Many office workers tired of the effects of sedentary jobs are finding ways to incorporate extra movement into their daily work  routines — even if they’re too busy at work to leave the office. They’re getting help from custom-designed furniture, exercises in their office and stretches tailored to the desk-strapped worker.

As a result, some are reporting increased energy, decreased stress and a greater overall sense of well-being. “The body is designed for movement,” says Todd Berntson, a chiropractor and author of Deskercise (Center Path Publishing, 2005). “When you sit at a desk all day, you’re essentially putting your body in a cast. Your muscles become weak and tight,” Berntson says.

Long work hours at sedentary jobs interfere with the personal fitness goals of countless adults. Consequently, the majority of adults fall far short of the U.S. surgeon general’s most recent activity guidelines: 30 minutes of moderate physical activity on most days.

Martin’s personally designed treadmill workstation might seem like an extreme example of combining fitness and work, but he’s not the only one to try it.

Dr. James Levine, an obesity researcher with the Mayo Clinic in Rochester, Minn., concocted his own treadmill workstation in 2005. Then he urged a handful of other Mayo employees  to follow suit. Over a year later, they continue to walk while they work.

Other workers have chosen vertical workstations to remain nimble. These desks enable workers to stand at their desks.

Lawyer G. Stewart Webb Jr. counts himself a satisfied customer. He writes and reads lengthy documents while standing. Also, he habitually paces back and forth in his office while on the telephone, thanks to an extra-long cord. “If in the afternoon I’m working at my desk and find I’m fading a little bit, I switch to my vertical desk. It gives me a little bit of a pickup,” Webb says. “I think better on my feet.”

Although vertical desks remain part of a niche market, they’re catching on, experts say. Costs vary but can reach as high as a few thousand dollars. Martin’s treadmill and desk, for example, cost $2,500.

“People are getting tired of sitting. The solution  is to get off your rear end,” says Jim Gattuso, owner of Akron, Ohio-based Amish Country Furniture Sales, which sells custom-designed office furniture. His company’s expanding list of vertical workstation purchasers includes the Pentagon, the White House and the Internal Revenue Service.