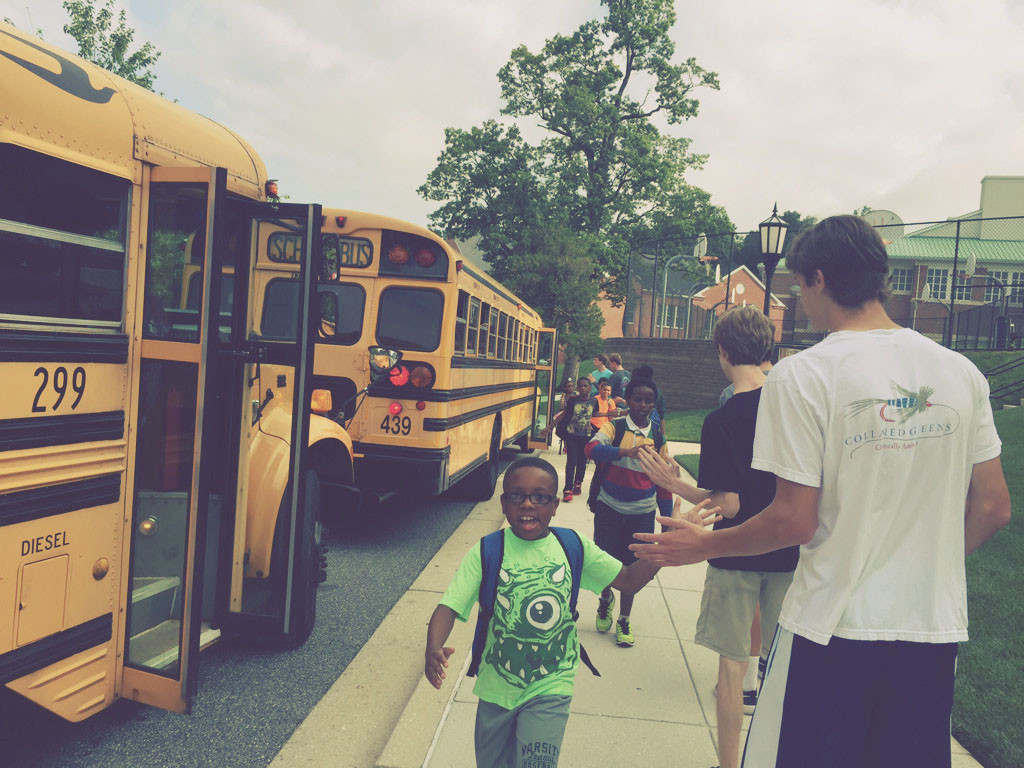 On a blindingly sunny day in June, at precisely 8:15 am, a couple of packed school buses pull up to the curb of St. Paul’s Middle School in Brooklandville and deposit around 110 elementary- and middle school-aged children onto the sprawling bucolic private school campus. As they file out, the riders are greeted by several volunteers—high school students from St. Paul’s—and counselors who they animatedly “high five.”

The ritual marks the start of each day at Bridges, a five-week summer enrichment program that includes breakfast, academics, and lunch, followed by activities like swimming, art, games and athletics and ending with a bus ride back to stops near the students’ Baltimore City neighborhoods. There are also weekly field trips, motivational guest speakers, and team-building exercises. In essence, the summer segment of Bridges—a year-round educational support program—makes for a stimulating experience that any parent would be thrilled to have his or her child attend, and not just because it’s free.

Bridges is just one of several programs that local private schools have taken on to close the opportunity gap that exists for Baltimore’s youth. The city has long benefited from a strong independent school community known for academic excellence, abundant resources, and a target audience consisting primarily of children from privileged families. What Baltimore independent schools are less known for is their commitment to helping students in the Baltimore City Public School System get an educational boost.

Started at St. Paul’s School in 1993 as a summer enrichment program for 18 students at a Title 1 school in Baltimore City, Bridges has since expanded into a year-round program for students ages nine to 18. In 2014, a second site opened at Gilman School. Bridges currently provides 187 students , tutoring, SAT prep, summer jobs, and guidance through middle school, high school, and post-high school. Operated with a budget of $600,000, (thanks to support from individuals, corporations, and foundations as well as in-kind support from St. Paul’s and Gilman), Bridges has seen thousands take advantage of its program.

“St. Paul’s started in downtown Baltimore as a school for orphaned boys.  Bridges was launched as an innovative and contemporary way of continuing to fulfill [the school’s] mission,” said David Faus, St. Paul’s headmaster.

Victoria Webb is an example of a student on the receiving end of that mission. A 2015 graduate of Western High School and one of only the second cohort of students to complete nine years in the Bridges program, Victoria will attend Towson University in the fall, where she plans to major in biology—the first step toward her goal of becoming a neonatologist.

The ambitious young woman admits that her life could have taken a much different path. Growing up in Govans and Greenmount, gangs consumed many where she has lived. Seeing the effects of gang violence at close range, she deliberately chose to avoid them. That meant a conscientious decision not to make friends in her neighborhood—an almost unfathomable notion given Victoria’s naturally gregarious nature. She met her best friend at Bridges, which she describes as “feeling like one giant family.”

Victoria also found summer jobs through Bridges, which placed this summer 39 rising tenth through twelfth graders at 19 area organizations. Her favorite was working at University of Maryland Medical Center, where she observed open heart surgery in the Cardiac Surgery Intensive Care Unit and began to see herself one day working in a hospital.

“I am a pretty motivated person. I knew I wanted to do something to help other people. But if I hadn’t been at Bridges, I would be in a different place right now—not having as many connections as I do,” Victoria said.

Building confidence in the ‘tween years

“We deal with communities that are normally silo-ed and have nothing to do with each other,” MGP executive director Wendy Samet stated. Through MGP, teachers and students communicate and educate each other.

This is, in fact, perhaps the most unique facet of MGP. In the summer academic enrichment portion of the program, you’ll find teachers from both the public and private schools working in the same building, teaching mostly BCPSS middle schoolers. But in at least two of the participating schools—Friends and Calvert—the summer participants include not just students from inner city schools, but also those who attend the partner private schools.

“Us and [kids from] Friends mix really well,” said Brandon, a chatty graduate of Hampstead Hill Academy who will attend Calvert Hall in the fall as a ninth grader and has spent the past four summers at Friends’ MGP program. The rising high school freshman seems confident that he’ll be well-prepared for the college preparatory program he’ll face at Calvert Hall, as he slogs through five summer reading books required of incoming ninth graders. “MGP teaches us time management. In high school, you have free periods and you need to learn how to use that time wisely,” Brandon said.

The ultimate goal of MGP is to see its participants admitted to competitive area high schools. Concurrent with the goal, MGP expects its graduates to achieve the following academic yardsticks prior to entering ninth grade: the ability to write a well-crafted five-paragraph essay, read for pleasure, cite text, and be prepared for Algebra One. Samet has reason to believe the preparation is paying off.

Ten years ago, she says, less than one percent of the public city schools served by MGP were accepted into Baltimore’s top competitive high schools: City, Poly, Western, and Dunbar. Now, it’s at 76 percent, and another 14 percent are admitted to the Baltimore School for the Arts, Christo Rey, and area independent schools. Tangible results like those help perpetuate and even increase independent schools’ involvement in outreach efforts.

Such is the case at Roland Park Country School. Long involved in MGP, the school was tapped in 2009 by former Baltimore City School Superintendent Andres Alonso to be a part of discussions between area private schools and BCPSS about leading educational institutions marked by rigor and high expectations.

“We didn’t know what [the end result] would look like. But we entered with a commitment to do something real,” said Carla Spawn-van Berkum, RPCS’s assistant head of school for academics.

RPCS has done something very real indeed. It has become the first independent school in the nation approved to open a charter school. This August, 78 girls in fifth and sixth grade will become the founding class of Lillie May Carroll Jackson Charter School, named for a pioneer in the civil rights movement who believed in nonviolent resistance. The school is seeking a permanent site in the Park Heights neighborhood, where the bulk of its students live. In the interim, it will be housed at the former Chinquapin Middle School.

While RPCS and Bryn Mawr School initially worked in concert with city public school leaders to design an exemplary all-girls charter middle school, RPCS ultimately applied for the charter, which was granted in 2013. As the school prepares to open, it has a waiting list of 90 girls.

“Clearly, there is a demand for this type of school,” said Spawn-van Berkum.

RPCS will maintain close ties with the new fully independent charter school. On a day-to-day basis, an experienced principal will guide the growth of the new school, which plans eventually to reach an enrollment of 312 students.

Damia Thomas, who will serve as principal of LMCJS, started her educational career with Teach for America and most recently led Baltimore public city school Harford Heights Elementary School as principal. She refers to the incoming students at LMCJS as scholars, and extols a philosophy she calls “active citizenship.”

“In light of the recent uprising in Baltimore, we need to show students that they have a voice,” Thomas said. That voice might come in the form of doing something about trash-strewn neighborhoods or poorly lit streets.

“We need to teach these girls to be proactive instead of reactive. If we don’t like that the street is dark when we get off the bus, we must ask ourselves: ‘How do we change that? How do we galvanize the community?’ They haven’t been guided in that direction. A lot of families just learn to cope,” Thomas said.

As Thomas talks about some of the school’s features, including its carefully chosen faculty, emphasis on hands-on learning, an extended day that ends at 6:00 pm, and three free meals a day, it’s easy to believed it’s destined for success. But the school won’t be challenge-free, acknowledges Thomas.

“We have some parents who already have expressed that they want to volunteer, be supportive. But I also think there are some parents we’ll have to drag into the building,” she said.

Those students who lack a supportive caregiver miss out. While it’s hard to quantify all the benefits from programs like Bridges, recent statistics show the positive impact on long-term success. Last year, Bridges graduated its first complete group of 13 students who attended the program together for a total of nine years. Eleven, or 85 percent, headed to college directly after high school and they’re all returning this fall. That’s much higher than the 44 percent of BCPSS graduates from the class of 2012 who entered college directly after high school, the most recent data on the subject from Baltimore Education Research Consortium.

“The whole reason I’m doing this is because I volunteered for Bridges 20 years ago. Lots of other teenagers have also decided that this is a calling for them—supporting kids in urban areas,” Paymer said. “If we can help kids whose paths don’t normally cross to know one other, we can build a better society.”